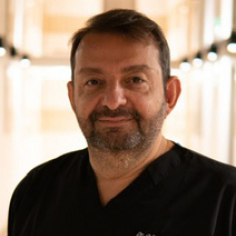 Dr. Tayfun Oguzoglu started hair transplantation in 1997 in Istanbul, for almost 6 years he used FUT technique for hair transplantation. He started doing first FUE procedures in 2003 and shared his experience with many of his colleagues by setting up the first FUE workshop in Turkey. In 2004 he focused on doing FUE procedures, he especially gave prominence to manual FUE operations. By starting motorized FUE applications in 2007 he brought many innovations into this field in our country and he succeeded in using this technology for his surgeries.

Dr. Oguzoglu joined International Society of Hair Restoration Surgery (ISHRS) in 1998, he has been in numerous positions for almost 21 years in ISHRS. For the last five years he has been working in FUE Advancement committee, which is the most authoritative committee of ISHRS on FUE and has been in ISHRS Membership Committee for three years, he also contributes to the development of the World Standard of Hair Transplantation by still working in ISHRS subcommittee of European Standards.

Within the 21 years that he was a member of ISHRS, He was the chair of ISHRS FUE REGIONAL WORKSHOP ISTANBUL held in 2016, he also took part in 2019 ISHRS FUE CADAVER HANDS ON & LIVE SURGERY WORKSHOP as co-chair.

Dr. Oguzoglu received the first award for his scientific work and contributions from ISHRS in 2016, also he was granted” ISHRS PROMOTING HIGH STANDARDS OF SAFETY AND QUALITY OF CARE OF HAIR LOSS PATIENTS” award by the chairman of ISHRS.

Dr. Oguzoglu is a American Board of Hair Restoration Surgery Diplomate (ABHRS).

He was granted with the title of Fellow (FISHRS), which is given by ISHRS to a small number of educator doctors who have high level of knowledge and experience.